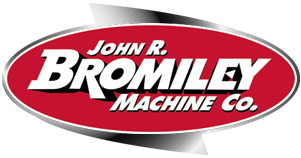 For over 45 years we have been cultivating the most highly skilled workforce of machinists, engineers and inspectors, while buying the most advanced machine technology available. Simply put, we build smart solutions. We are a full-service job shop delivering production lots per contract or blanket orders with J.I.T. deliveries. The Bromiley team consistently delivers high-caliber work, on-spec and on time, carefully solidifying its reputation one job at a time.

Our mission is to exceed our customers' expectations by continuously improving our products, customer service, manufacturing technology, and product quality; and to provide cost-effective solutions to our customers' business challenges. We accomplish this mission with the key objective of achieving profitable long-term growth. Innovation, creativity, integrity, attention to detail, and a passion for excellence are hallmarks of our business philosophy and our people.

John grew up in Philadelphia learning machining from his father who also had a small machine shop. This is where he was first exposed to the industry and grew his experience while he served in the Navy during the Korean War. After an honorable discharge he took various jobs in manufacturing learning from such companies as Philadelphia Gear Corporation and Brooks Instruments.

While employed as a night shift foreman at Brooks, John adopted a Great Dane named Lady Trixie Bell. In 1970, Trixie was bred and gave birth to 10 puppies, of which 9 were sold. From the income of that venture, John was able to purchase his own used Bridgeport Mill and a Hardinge Handscrew Machine, which were the first machines of his business. With this venture he came to be recognized as a quality manufacturer of precision instrumentation parts, suppling his former employer Brooks and several other local customers.

In 1974, he moved the machines from his home into a rented 2,000 square foot facility located in Hartzel's Village in Chalfont. At that time, he was specializing in sheet metal and screw machine products. Two years later, he relocated into a 3,600 square foot building on Bristol Road in Chalfont. Then again in 1980, after growing his customer base even further, production increased and the building was expanded to 9,000 square feet.

In 1990, he moved into a new 13,000 square foot facility built on the adjoining property which had been purchased a few years earlier. Soon the company's reputation for quality production machining led him to expand the business to what it is today - a 40-person, production machine shop operating in a state-of-the-art, 23,000 square foot facility.

Known for its integrity and uncompromisable quality, the John R. Bromiley Machine Company extends its reputation into the next generation with John's youngest son Jason. Being just like his father, Jason also started as a working machinist since his teenage years and has learned the business from the bottom up, developing and maturing as the next generation of ownership.

Since John's graduation to founder and mentor in 2006, Jason has been the driving force of quality initiatives, technology advancements and the overall direction of the company. With experience in most industries, the company delivers versatility, value and production capacity to every job it completes - whether it's a complex exotic military component or a simple commodity part that requires cost efficient manufacturing. The John R. Bromiley Machine Company strengthens its reputation with every job. 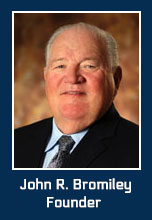 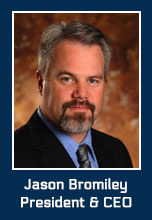